C1INH is a member of the serpin family of inhibitors, and is structurally similar to the serpin alpha1-antitypsin (AAT). As shown in this figure, mutant AAT Z protein misfolds, causing gain-of-toxic-function (GOTF). 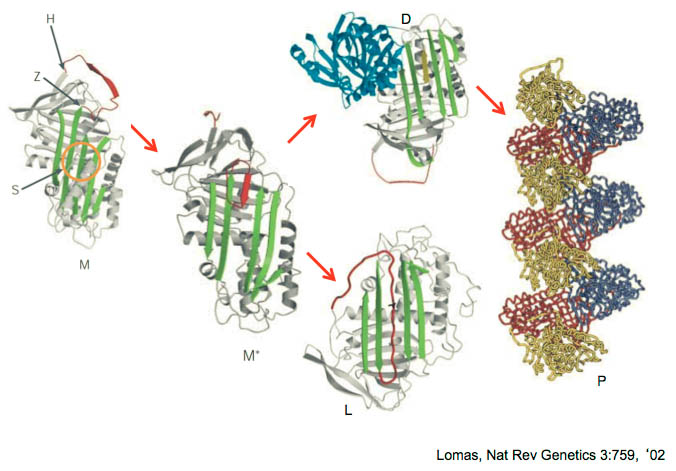 We discovered that the mutated misfolded C1INH protein is able to interfere with the secretion of the normal C1INH protein. This provides a possible explanation for the low C1INH levels in HAE and therefore for the severity of the disease. The C1INH GOTF may also be amenable to therapeutic intervention. The concept that acquired defects in secretion of wildtype C1INH may influence disease severity provides a novel basis for understanding HAE, and an opportunity to explore new molecular therapeutic interventions. Dr. Zuraw is the Principal Investigator on this Department of Defense grant.

Hereditary angioedema with normal C1 inhibitor (HAE-nlC1INH) is clinically similar to HAE due to C1INH deficiency (HAE-C1INH). HAE-nlC1INH has also been referred to as HAE type III. Angioedema attacks in patients with HAEnlC1INH may respond to the same medicines used for HAE-C1INH. Establishing a diagnosis of HAE-nlC1INH, however, is often difficult or impossible due to the lack of a diagnostic test. The most critical question facing angioedema care is whether we can identify those patients who will or will not respond to BK-acting medications, and thus potentially clarify which patients truly have HAE-nlC1INH.

In HAE-C1INH, the mediator of swelling has been shown to be bradykinin that is generated through activation of the contact system (shown below).

We are studying markers of contact system activation during angioedema attacks in patients thought to have HAE-nlC1INH. These studies may lead to better and more efficient ways to make the diagnosis of HAE-nlC1INH in affected patients.

Regulation of B1 bradykinin receptor expression in HAE

Increased generation of a small peptide called bradykinin from blood proteins has been proven to be the cause of swelling attacks in patients with hereditary angioedema. Bradykinin acts on a receptor (B2 receptor) located on the blood vessel or blood cells to cause the swelling. Evidence has accumulated that a second bradykinin receptor (B1 receptor) may also be involved; however, little is known about the bradykinin B1 receptor in angioedema. The figure below shows how these two receptors function. 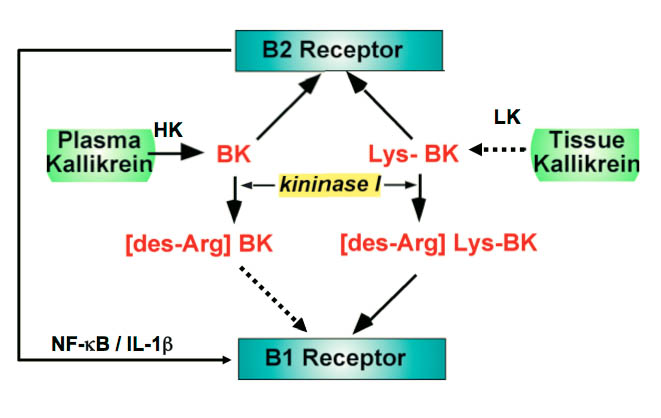 HAE severity is highly variable, ranging from patients who almost never swell to patients who swell twice per week. The factors that determine severity of HAE remain poorly understood. Angioedema Center investigators are studying genetic markers called single nucleotide polymorphisms (SNPs) that may influence HAE severity. By studying SNPs on DNA isolated from blood cells, they are hoping to better understand and predict which patients will have mild, moderate or severe HAE.

HAE due to C1 inhibitor deficiency is caused by mutations of the gene encoding C1 inhibitor, leading to inadequate C1 inhibitor function. Correcting the mutation could result in a cure for HAE. Angioedema Center investigators are pursuing methods that could correct the disease-causing mutations.